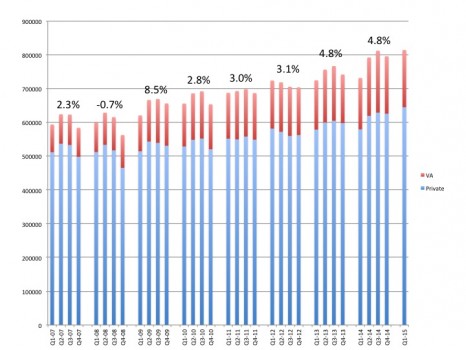 Quarterly net unit sales of hearing aids, with the private/commercial market shown in blue, and the VA shown in red. Overall yearly sales percentage gains/losses are displayed at the top of the graph. Source: HIA.


Hearing aid sales in the United States during the first quarter of 2015 increased by 11.32% compared to the same period last year, according to statistics generated by the Hearing Industries Association (HIA), Washington, DC. The increase reflects almost identical gains from both the private/commercial sector and the Department of Veterans Affairs (VA), which saw dispensing activity rise by 11.32% and 11.31% respectively. This comes on the heels of fairly strong 2014 year-end dispensing activity, where the private sector saw sales rise by 6.26% and the VA by 11.21% (for a total of 7.28%) in Q4 2014.
According to HIA historical figures, this year’s first-quarter sales increase is the highest since the first quarter of 2004 (13.6%)—a year in which the overall market increased by 7.5% after a slight decline in sales during 2003. However, the first quarter’s strong sales were aided by a relatively flat basis (ie, a 0.95% sales increase in the first quarter of 2014). Additionally, how much of the 11.32% increase is due to burgeoning sales at Costco, which is estimated to be growing by 20% per year, and other non-traditional distribution outlets is unknown.
Behind-the-ear (BTE) hearing aids in the first quarter constituted 79.5% of total US sales in Q1 (80.6% in the private sector and 75.0% in the VA), up from 77.1% in the same period last year. As a subset of BTEs, sales of RICs and RITEs made up 63.5% of the market compared to 56.7% of the market in Q1 2014. About 7 in 8 (86.7%) hearing aids sold in the first quarter contained wireless technology, compared to 82.0% in full-year 2014.
The return-for-credit (RFC) rate in Q1 2015 was 19.7%, about the same as the Q1 2014 RFC rate (19.1%).
– See more at: http://www.hearingreview.com/article/hearing-aid-sales-hit-double-digits-first-quarter-2015/#sthash.iuwkvoIq.dpuf
Categories: online hearing aid, Uncategorized

HEARING AIDS FOR 50 TO 75% LESS THAN OTHER COMPETITORS

We founded Century Hearing Aids to provide tremendous savings to customers while providing the highest quality hearing aids. We sell Private Labeled Hearing Aids from the best hearing aid manufacturers in the world. Our hearing aids offer the same digital technology and features of a $2000+ hearing aid – for 50 to 75% less. We stand behind the quality of the products we sell. We carry Open Fit, Behind the Ear and In the Ear hearing aids.  Thanks for visiting our website!  Cheers, CHA Team